Cian (19 months old) loves jigsaws and farmyard animals. When he was younger, we used to do jigsaws on the floor, or a low coffee table. Recently, he’s taken to doing jigsaws on the shelves of the bookcase, where we now store his toys. He’s always enjoyed climbing and playing at height, so this is just a natural preference for him.

I left his farmyard puzzles in a bowl on the bottom shelf. He started putting the puzzles together on the second shelf. Once he’d completed the jigsaws, he tidied them away in to the bowl.

Next, he brought over his farm animals and started matching the animals to the jigsaws. This was the first time he’s matched the two together.

Cian, now two, is not a big talker. But he is starting to use a few words to communicate now. He still loves these jigsaws, and reaching up to the other shelves. So sometimes I hide some of his jigsaw pieces on the fourth shelf up.

I love his stretching sound as he reaches up.

Then, Cian crouched down to find the farm animals, which all jumped (or swam) along the jigsaws to congregate at the back of the shelf. 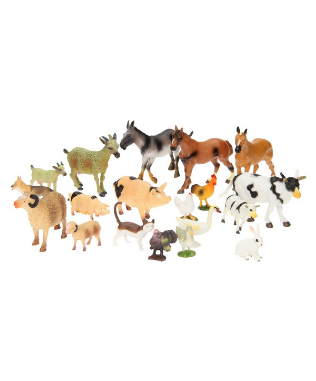