Cian, 2 years and 5 months, has been obsessed with this crocodile jigsaw since his second birthday. He will put it together, take it apart, then put it back together on loop.

Cian recognises some of the letter sounds, when he sees the letters, but needs help with the others. Luckily he knows enough that he’s ready to correct me, when I’m sleep deprived and get my sounds mixed up!

He doesn’t need to know the letter sounds at this age, but hears his big brothers sounding them out when reading and writing. Being very determined to be the same as them, he wants a go too, “My turn, I do it!”

The snapping crocodile mouth always gets up to lots of mischief, so the other body parts had to run away and hide behind the teepee.

Cian rebuilt his crocodile, but each time he went to touch it, he had to jump back to avoid the snapping jaws.

He tried stroking along the top of the crocodile’s nose, to try and calm it down, but the crocodile bit his thumb, to cries of, “Not again!”

Finally, he decided to teach the crocodile how to fall asleep. Once he was happy that the crocodile was calm and dozing, he pulled him over for a snuggle. 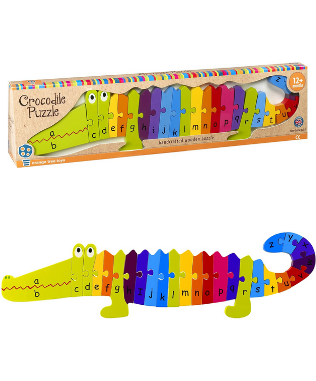 Crocodile shaped jigsaw puzzle, with the letters of the alphabet on it.