After watching Ioan sort amounts of money into groups, Finny asked to have a go himself. He has never handled money and had no idea what each coin was worth, so I knew this would be slow going. But as our activities are child led, I was happy for him to have a go.

Can you match the coin to the amount?

The first coins Finny picked up were 1p and £2.

Can you order the coins from the smallest amount to the largest?

Finny knew that 1 pence was the smallest amount, because there are 100p in £1. He just didn’t know what 1p looked like. Part way through I realised he was ordering the coins according to the size of the coin, rather than the value.

Now that he was looking at what the coin was worth, he managed to put 1p, 2p, 5p, 10p, 20p and 50p in order, with his £2 above his 2p and his £1 above his 1p. With a reminder of the difference with pence and pounds he was able to finish ordering the coins.

I suggested stopping at this stage, but Finny was keen to keep going.

He found the four 10p coins, then worked out that that would equal 40p.

Next up, he found the 5p coins.

Finny used the ‘smaller than’ and ‘greater than’ crocodiles to compare the amounts. He knew that the crocodiles always ate the largest amount. He can normally compare numbers easily, but keeping track of pounds and pence was a bit trickier.

After drawing teeth in all of his crocodiles mouths, we had one spare crocodile left. We used it to compare £2 and £1.

As the crocodile had eaten two 50ps, Finny needed a smaller amount to compare it with.

He added a couple more crocodiles before declaring his tray, “Done!”.

Children count reliably with numbers from 1 to 20, place them in order and say which number is one more or one less than a given number. Using quantities and objects, they add two single-digit numbers and count on to find the answer. 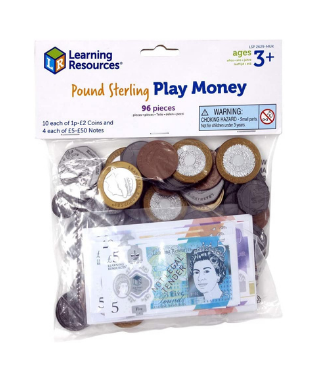